What a mega race! After marshalling the Lakes Sky Ultra last year I knew I’d be back to run it. The race is 56km with 4500m ascent, with some fun scrambling on Striding Edge, Eagle Crag and Pinnacle Ridge too!

I felt really ready to run when race day eventually came – I was worried I was maybe a bit too ready. I’d reccied most of the route twice and some bits 3 times and I was feeling pretty strong.

At the race briefing race director Charlie showed the competitors the video of last year’s race – this made me really excited! I was even more excited the next morning. Nervous, excited, nervous, excited  – I just needed to start running! 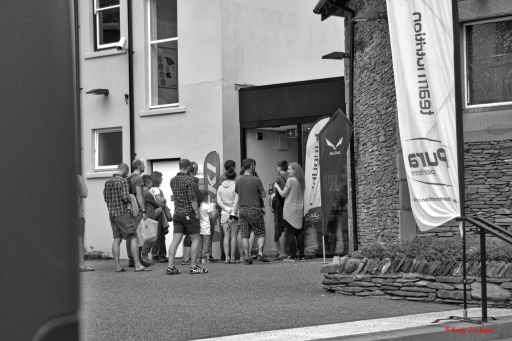 I hung out near the back of the starting crowd, expecting there to be quite a stampede for the first few miles. Running all the way up Fairfield is quite possible – but it is also a good way to destroy yourself an hour into what what I expected to be an 11+ hour race!  Starting really slow in my previous Skyrace, the V3K, had worked well and I’d felt strong all the way so this was my plan. Finding myself running along beside Carol (my pacing idle!) about a mile in I thought was probably a good place to be.

The ascent of Fairfield was really claggy but the summit came soon enough and I got to enjoy the super fast scree decent into Grizedale Tarn – looking rather more pleasant than it did when I was marshalling here last year! After the big effort up to Dollywagon Pike the undulating run up to Helvellyn was lovely, as I chatted away to other runners.

It was great to be greeted by LittleDave and his beating drum on top of Catstycam. Striding Edge was really dry so the ascent was great and I was soon greeted by Bob and Karen Nash at their checkpoint. It felt like a bit of a sociable gathering up on the hills!

I hadn’t reccied the decent off Eagle Crag. Most of the way it was a nice grassy descent, with a small section of scrabbling and a horrid scree slope at the end. Then came the fun part; the grassy ascent to the start of St Sunday Crag was a crawl – literally on all fours for about 20 minutes! I couldn’t wait to start the scrambling. Pinnacle Ridge had a daisy chain rope on it so it was pretty quick getting up – I was kind of disappointed when it was over.

After a really slow few miles it was great to stretch my legs out on the long decent into Patterdale. It was lovely to see a cow bell ringing Casper here and I moved into 3rd place just before the check point. I spotted the vegan energy balls – I munched on one as I left and had another one straight after on the climb out of Patterdale. With Mountain Fuel Extreme, together with Pura Beetroot Bites taking on calories was super easy  – it was awesome!

The second part of race after Patterdale is pretty tame in comparison  – for those who had saved the energy to run! I saw very few people along here and the time just flew by. At the top of Mardale Ill Bell  I couldn’t believe I was only just over 7 hours in. If I kept at this pace I’ll be back in under 10 hours – which was faster than the sum of my reccied parts!

I got to the top of the hill just before the decent to Kirkstone pass in about 8 hours 20 minutes where Casper was there with his cow bell again. I felt pretty emotional as I saw Casper, I just couldn’t believe I’d made such good time – but managed not to cry!

Pushing hard on the final ascent up Red Screes.

The final ascent up Red Screes (straight up the face!) was tough but I knowing it was the last ascent I just kept pushing. Then for the wonderful 3 mile descent to the finish – I really did feel like I was flying!

I couldn’t believe I had finished in 9 hours 20 minutes  – about 2 hours faster than I had predicted! I managed to keep hold of 3rd lady too! What an awesome day!

Thank you so much to race director Charlie from Mountain Run for creating such a mega route and race. The organisation was fantastic! Thanks also to the guys at Nav4 Adventure for keeping us all safe and all course all the lovely marshals and helpers!

Thanks also to Mountain Fuel for keeping me full of energy all the way round!

MOViE iT have made a create video of the day too here!

The offical UK Skynning race report are images are here and the Race Director’s report is here.